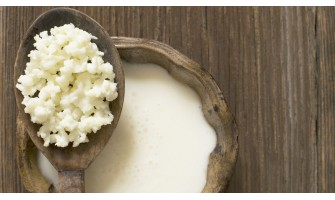 These days, kefir is a popular food item in the health industry. The word “kefir” is Turkish, and roughly translates to “long life.” Essentially kefir is a cultured drink that tastes somewhat like a yogurt drink. Milk kefir, in particular, can be made from either a powdered culture, explicitly created to make kefir or a mother culture known as milk kefir grains.

The powdered culture is comprised of a proprietary blend of different bacteria strains, while the grains have a more complex composition. Milk kefir grains are a mother culture made of polysaccharides, and the main element in them is kefiran.

This mix of polysaccharides contains both yeasts and bacteria, which exist in symbiosis with each other and the milk it feeds and cultures from. These grains have an appearance similar to a miniature floret shape (like cauliflowers) and have a gelatinous feel to them.

No one is exactly sure of where kefir grains first appeared. However, what we do know is that they originated from the Northern Caucasus Mountain region in the region formerly known as USSR. People say that the locals of the Caucasus Mountains discovered kefir a thousand years ago.

Others also believe that it was a ‘miraculous’ gift from the Prophet Mohammed, and thus they are also known as the 'Grains of the Prophet.' Regardless of where they came from, the grains were seen as precious jewels due to their ability to preserve and enhance milk.

Kefir is also closely connected to the longevity of the Caucasian people who were renowned for living healthy and long lives. Legend says that the Caucasian people tried to keep their kefir hidden. Yet, at the turn of the 20th century, stories about kefir were leaked to Russian officials who wanted to make the drink available to all Russian citizens.

After some negotiations, the Kefir grains reached Russia. After this point, kefir began to be widely consumed throughout Eastern and Central Europe, where the drink is linked to general well-being. Today they are widely consumed throughout the world, especially in places such as Cairo where it is readily available. In fact, Tayyiba Farms in Egypt provide vast amounts of Kefir, in both grain and powder form.

Benefits
Milk kefir grains are known for their numerous health benefits. For starters, they're highly nutritious. The grains are a rich source of calcium, protein, and vitamin B. They also consist of a wide variety of bioactive compounds such as organic acids and peptides, making them a healthy option to include in your diet.

Moreover, milk kefir grains are widely known to protect against cancer.  The probiotics in this fermented dairy product stimulate the immune system, which can help your body ward off cancer and can reduce tumor growth. This has been proven in numerous test-tube studies.

In both children and adults, kefir is commonly used to combat the flu. It contains Zinc and B6 that your body absorbs easily and uses to fight against the flu.

Usage
Milk kefir grains can be used to make several different food products such as cheese, yogurt, and bread. The culture is used in a similar way to yeast. However, in comparison to yeast-based products, kefir is lactose-free and doesn't encourage the growth of yeast. Kefir grains can be used to make a variety of delicious dishes, but you can also consume kefir raw!
The effects of kefir are felt pretty quickly, so you don’t need to drink large amounts of it. The recommended dosage for a healthy person is 200-300ml of milk kefir a day. This roughly translates to one cup. If you’re drinking water kefir, then you can go up to two cups a day. In case you’re taking kefir to treat a certain illness, such as cancer, you should consult your doctor for the optimal dosage, as it will differ from person to person depending on your age, health, and illness.
Many people also ask under what conditions to use kefir. Luckily, due to the nature of this substance, you don’t have to be too cautious while using it. You can take kefir at any time during the day, it doesn’t matter whether you consume it on a full or empty stomach. However, some experts suggest consuming it on an empty stomach in the morning is optimal.
You can also consume kefir even if you’re lactose intolerant! Despite coming from cow and goat milk, kefir contains very little lactose and is hence the ideal dairy product for lactose intolerant people. If you’re vegan, you may not be able to consume milk kefir. However, water kefir is completely vegan-friendly!

How to Make
Though a bit tricky, you can make milk kefir grains by following these steps:
First, transfer a generous spoon of kefir grains into 4 cups of pasteurized milk, if using raw milk, increase the portion of kefir grains by 400%. Cover the cups with a coffee filter or a clean cloth, secured by a rubber band. Place the cups in a room temperature spot (around 68 - 85 Fahrenheit) to culture). Culture until the aroma of the milk is pleasant, and it has slightly thickened. This usually takes approximately 18 to 24 hours but can take lesser time in warmer temperatures.

Once the milk has changed texture, and the culturing is done, separate the kefir grains from the completed kefir. Place the kefir grains in milk and end with storing the finished kefir in the refrigerator. You can add the milk kefir grains to a smoothie, salad dressing, on top of eggs, or you can spread them on bread, crackers, or toast.

If you are searching for a place to buy kefir online, Tayyiba Farms in Egypt is renowned for selling high-quality milk kefir grains, as we mentioned before. They come in one spoon portions or 500g+ if you are thinking industrial. All of their products are known to be organic and are grown on farms free of pollution. Cleanliness and quality are two things Tayyiba Farms doesn't comprise on.